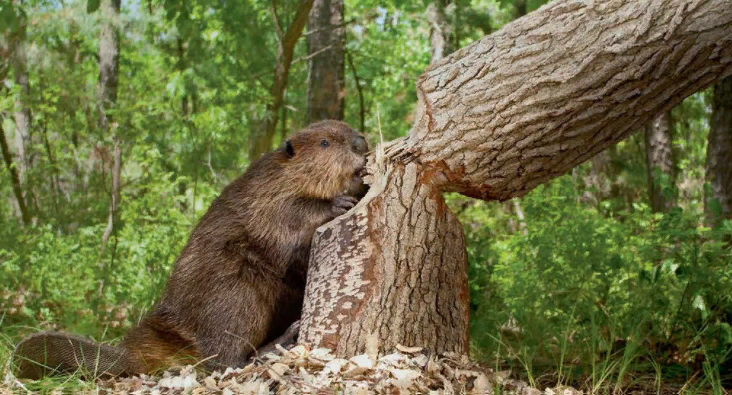 Tweet
Share
Share
Pin
0 Shares
Contents hide
1. Beaver Cutting down Tree: How Does A Beaver Know Which Tree To Cut Down?
2. A Little More About Beavers
3. Video: Beaver Cutting Down Tree

Beaver cutting down tree constantly and sometimes cause harm. And this is exactly what our article will be about today.

The banks of the Red River are home to a large population of beavers. They are a fairly large species of rodent, usually three to four pounds long.

When they grow up, they can reach a weight of forty-five to sixty pounds. They have a round head and faintly round ears. The fur is very soft and pleasant to the touch, dark brown. The tails are mostly flat, dark in color, somewhat like an oar. The teeth are quite massive and dark orange. Beaver cutting down a tree is cut down with their teeth.

Beavers settle in lodges, which they dutifully build from found branches and mud. In some rivers and streams, they construct entire dams so that the water depth is comfortable for their purposes and maintains its stability. On the Red River and other similar rivers where frequent floods occur, beaver dams do not have the desired effect.

Therefore, beavers that live on the Red River or similar rivers build their lodges in special burrows. These burrows are located along the river bank. Often you can get into these burrows only underwater, but you can see them and above the surface of the water. It is a sight to behold when the water level is lower than usual.

Beaver Cutting down Tree: How Does A Beaver Know Which Tree To Cut Down?

It is easy enough to tell if beavers have been to a given place by looking at the trees growing around it. To fell a tree, the beaver nibbles around it, biting off sliver after sliver until he achieves the desired effect. Eventually, a distinctive mark appears at the base of the stump or log, which the beaver has cut down. Quite often beavers by their actions helping people to make cutting a tree in section.

Beavers do not gnaw on the first tree they see. They usually choose not particularly large trees to cut down. If the tree is between two and six inches in diameter, it is the one most likely to fall prey to beavers.

However, there are exceptions to every rule. Beavers can cut down larger trees as well. They may even target a tree that is thirty-three inches in diameter. If beavers are building a dam, they will cut down trees frequently.

Much more often than their brethren who live in underwater burrows. This makes sense since it is from wood that they build dams. But this is not the only reason why beavers cut down trees. This is also because the main part of their diet is the bark of trees.

One beaver can saw through 100 trees and build about 50 dams in its lifetime. Their teeth are a self-sharpening tool. They grow at a record rate of up to 0.5 cm per month. As they chew through the wood, the animals grind their teeth. It takes no more than 5 minutes for a beaver to pile up a tree about 7 cm in diameter.

Their dams are majestic structures that can even be seen from space. They can be up to 700 m long. The most extensive one was recorded in New Hampshire. It was 1.2 km long.

A Little More About Beavers

READ ALSO ➡  The dangers of DIY tree cutting : what a gardener needs to know

In this video you can see how beavers making their job, cutting down trees.

Catching beavers were very popular in the twentieth century because beaver pelts were highly prized in those days. Part of the steamboating on the Red River began because of the need to transport beaver pelts.

The catching of beavers was not regulated, and because of this, the population of beavers began to rapidly die out, not having enough time to leave their offspring.

Finally, people came to their senses. They introduced rules for hunting and trapping beavers, which allowed the animals to restore their population in many parts of the continent. Beavers not only rebuilt their numbers but also increased their numbers. This led to these animals becoming pests in some regions.

Widespread dams began to block the path of fish to their spawning grounds. Beaver cutting down trees began to die and in large numbers.

The fact is that people try not to cut down trees growing near riverbanks because they stabilize the banks from erosion. The root system keeps the soil from crumbling, holding it in place. When beavers cut down these trees, their root system ceases to function with the same efficiency.

Beavers, of course, make up for some of the damage they do. Their dams also keep erosion in check, and the resulting ponds quickly become populated with new insects and fish.

And I would still read it:

How Much Does Tree Trimming Cost on Average (2021)

The Homeowner’s Guide to Tree Removal: Cutting Down a Tree in Sections (2021)
READ ALSO ➡  How to Stop Tree Branches from Growing Back - Detailed Manual

We use cookies on our website to give you the most relevant experience by remembering your preferences and repeat visits. By clicking “Accept”, you consent to the use of ALL the cookies.
Cookie settingsACCEPT
Manage consent

This website uses cookies to improve your experience while you navigate through the website. Out of these, the cookies that are categorized as necessary are stored on your browser as they are essential for the working of basic functionalities of the website. We also use third-party cookies that help us analyze and understand how you use this website. These cookies will be stored in your browser only with your consent. You also have the option to opt-out of these cookies. But opting out of some of these cookies may affect your browsing experience.
Necessary Always Enabled
Necessary cookies are absolutely essential for the website to function properly. These cookies ensure basic functionalities and security features of the website, anonymously.
Functional
Functional cookies help to perform certain functionalities like sharing the content of the website on social media platforms, collect feedbacks, and other third-party features.
Performance
Performance cookies are used to understand and analyze the key performance indexes of the website which helps in delivering a better user experience for the visitors.
Analytics
Analytical cookies are used to understand how visitors interact with the website. These cookies help provide information on metrics the number of visitors, bounce rate, traffic source, etc.
Advertisement
Advertisement cookies are used to provide visitors with relevant ads and marketing campaigns. These cookies track visitors across websites and collect information to provide customized ads.
Others
Other uncategorized cookies are those that are being analyzed and have not been classified into a category as yet.
SAVE & ACCEPT
Adblock
detector